On Monday, January 17th, Americans honored the Reverend Doctor Martin Luther King Jr. The holiday, which takes place annually on the third Monday of January, marks King’s birthday — January 15. The holiday was signed into law in 1983, but the campaign to create MLK Day began almost immediately after King’s assassination in 1968. Once signed into law, Martin Luther King Jr. Day became the first federal holiday to memorialize the life of an African American.

King’s legacy is defined by his strength and fortitude to fight for social justice and racial equality. He was a nonviolent activist in the civil rights movement and a beacon of hope to all who dream of a more equitable world. Inspired by King’s tireless pursuit of a better world, we at The Mx Group devoted this MLK Day to being active participants in society. Across the company, we dedicated the 17th as “a day on, not day off” with our inaugural Day of Service.

CREATING A DAY OF SERVICE

The Day of Service is an opportunity for us as an organization to live our company values of equality, diversity and empathy in a tangible way. We worked with charitable organizations across the Chicagoland area providing our services and resources. “We realized we needed to evolve as an organization, grow as people and recognized we needed to honor Martin Luther King Day differently going forward. So, a year ago, on this day, we committed to making a Day of Service,” said Tony Riley, The Mx Group’s president. “And while there is a lot going on in the world, in our industry and in our homes, I think the stories we will hear today, the work we will do and the people we will meet will remind us how much we have to be grateful for.” 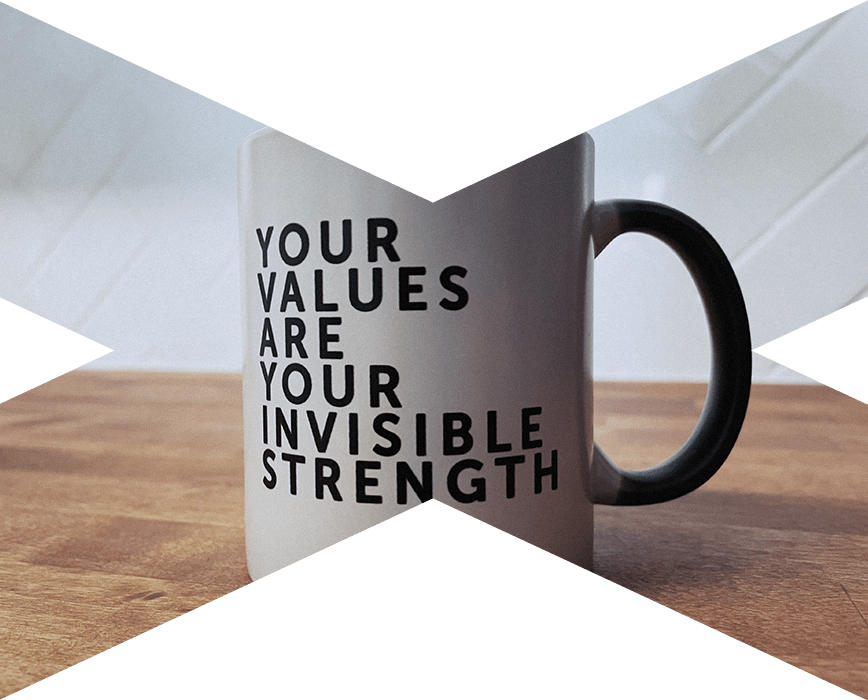 We united as an organization to collaborate and grow together while making an impact, both big and small, on society at large. Coordinated by Kate Fishburne, The Mx Group’s vice president of organizational development, we divided our talents and energies into groups — some virtual and some in-person — to serve charities using our marketing and advertising passions. We provided pro bono marketing services and expertise to Walls to Wages, By The Hand Club For Kids, A.R.F.-Animal Rescue Foundation and Chicago Scholars. These virtual Mx teams provided a variety of services for these organizations that included enhancements to websites, construction of an executive-level summary presentation and brand development advice for a new app.

“You never know — that one thing you say or do can have a major impact on kids,” said Toni Midderhoff Miller, The Mx Group’s vice president of marketing. Midderhoff Miller helped lead her team to create a business plan workshop that will help prepare the By The Hand Club For Kids’ seventh-grade entrepreneurs to launch their new business venture. 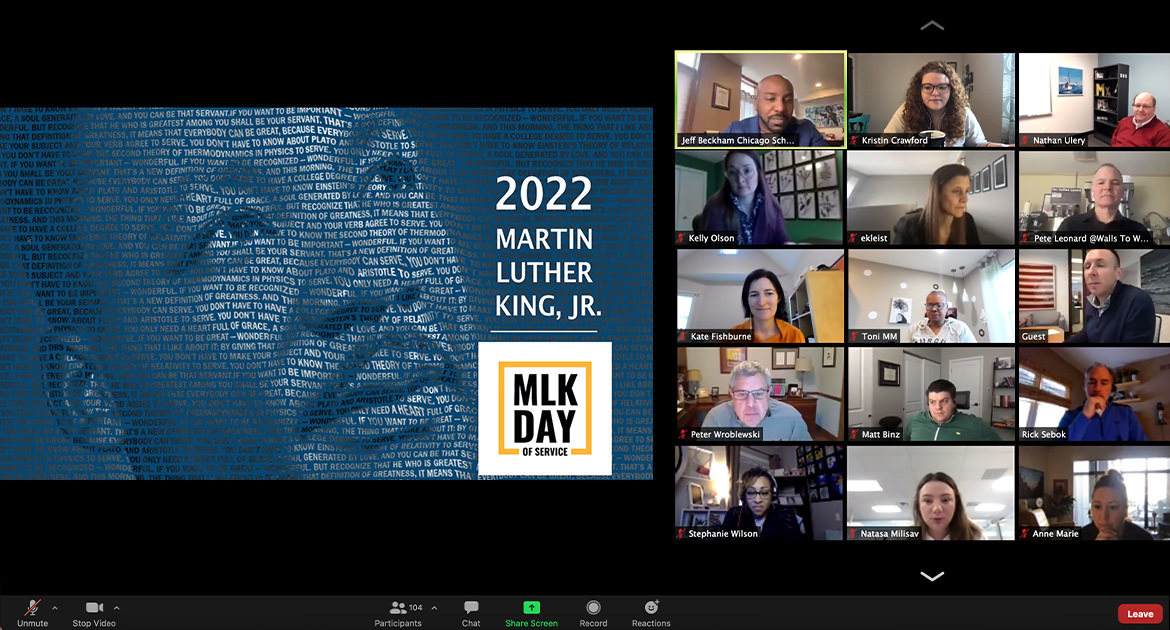 We kicked off the day with a whole-company virtual meeting where the vision for the day was shared as well as brief introductions to two of our pro bono projects. The gathering launched us into our day and various projects. 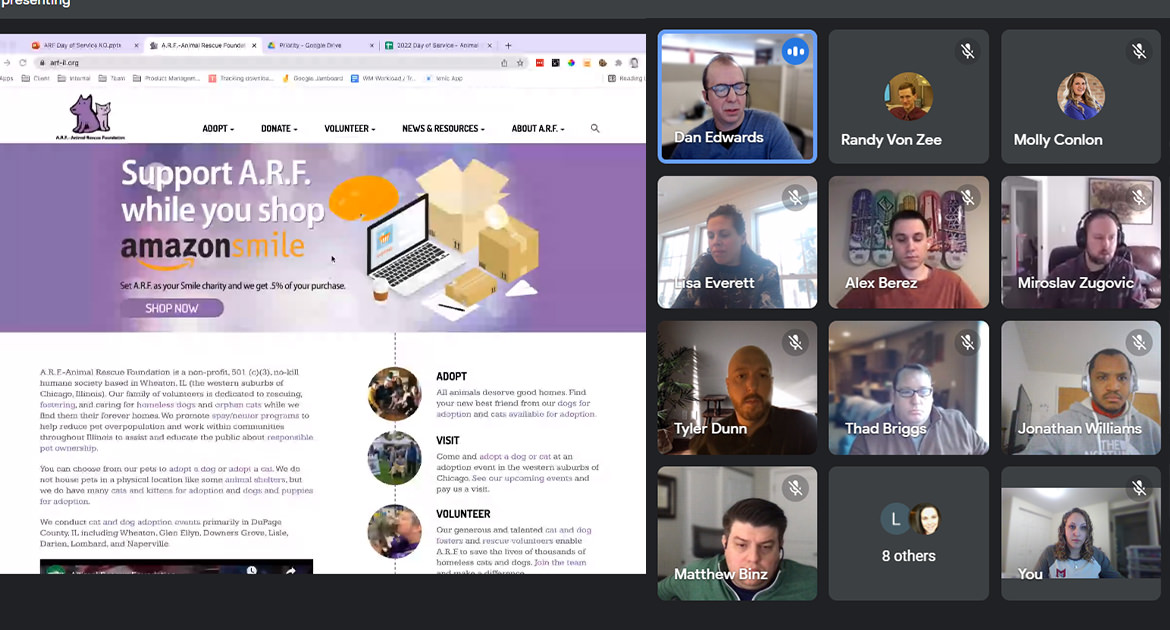 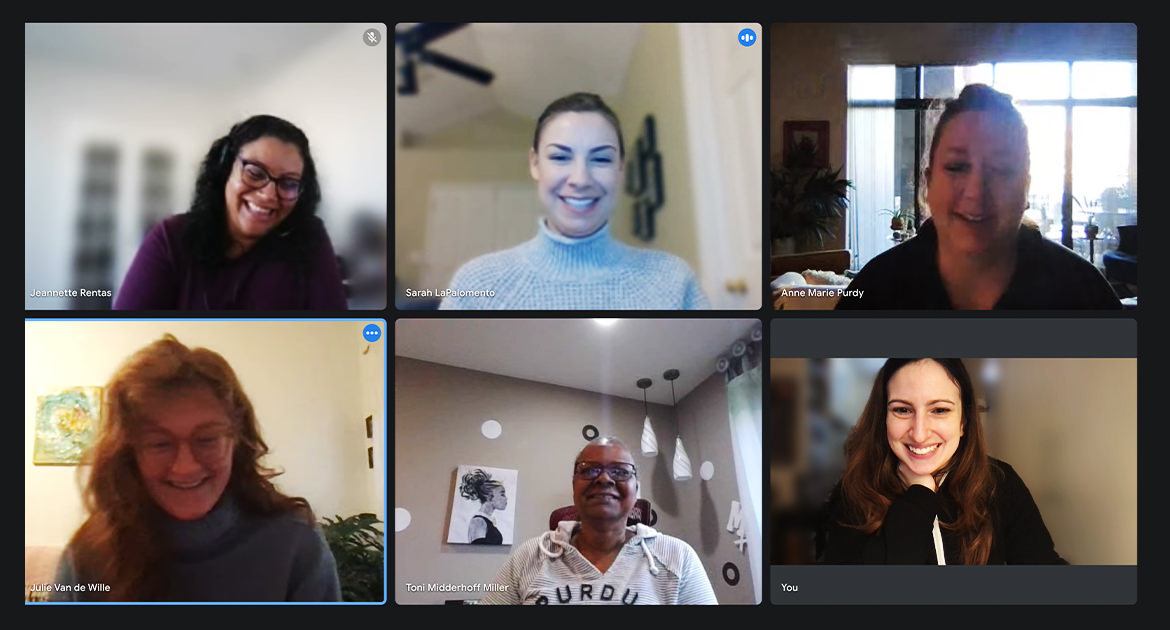 After a group of middle schoolers started their own “Blankets of Love” service project, they were hungry for training on marketing and business development to boost their entrepreneurial skills. Our team spent the day developing a business workshop that will help them shape their future business venture. 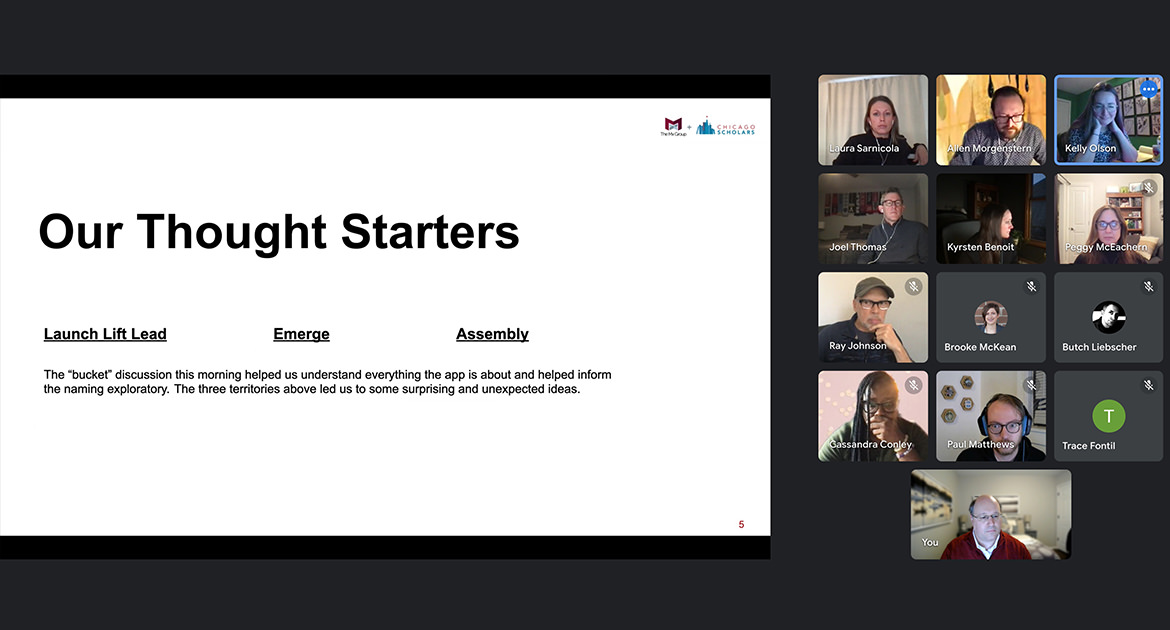 Chicago Scholars had a vision for an app that would bring a sense of community and resources to more students in the Chicago area. Our Day of Service team spent the day developing possible names and logos for the app. 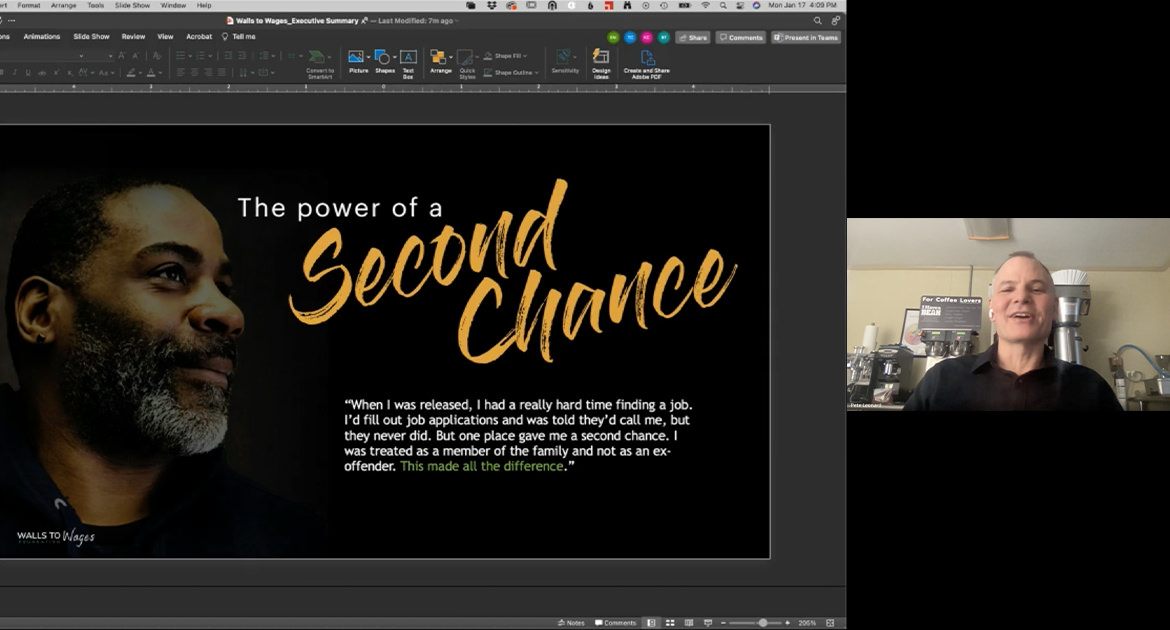 Walls to Wages’ mission is to help post-prison people, in a world that often overlooks and underestimates them, get the second chance they deserve. We helped create an executive summary presentation of this mission and vision to present in fundraising meetings as they work to fund their organization. 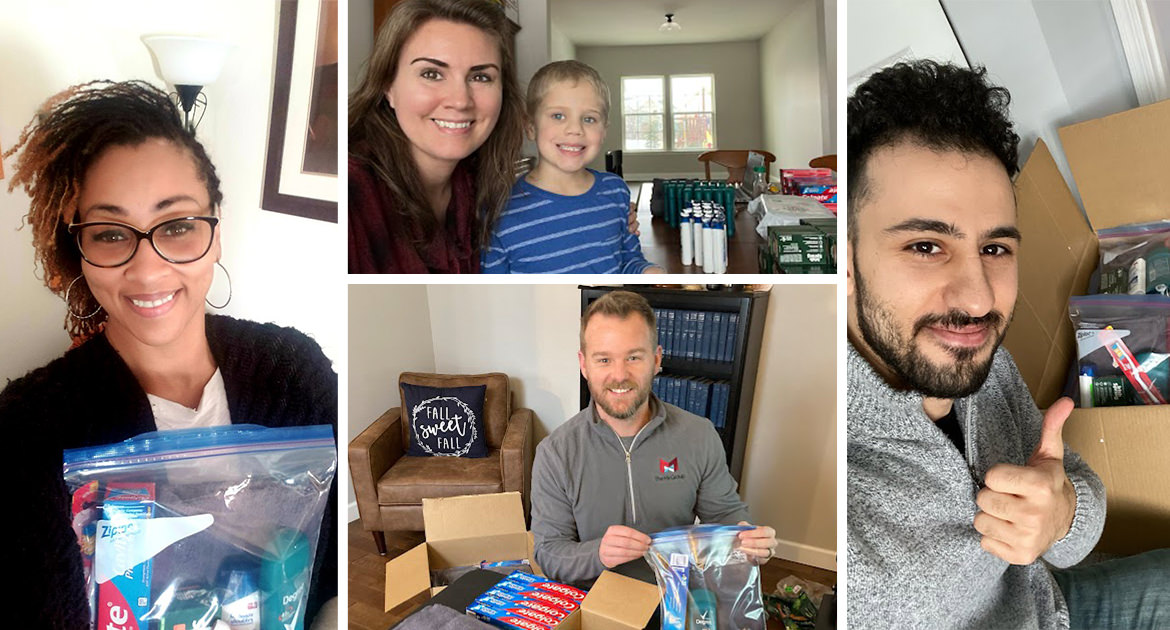 At the office and at home, Mx’ers packed over 250 hygiene kits that will be shipped to Convoy of Hope and distributed to those in need. From disaster zones to low-income communities, these kits are sent where essentials are needed most. 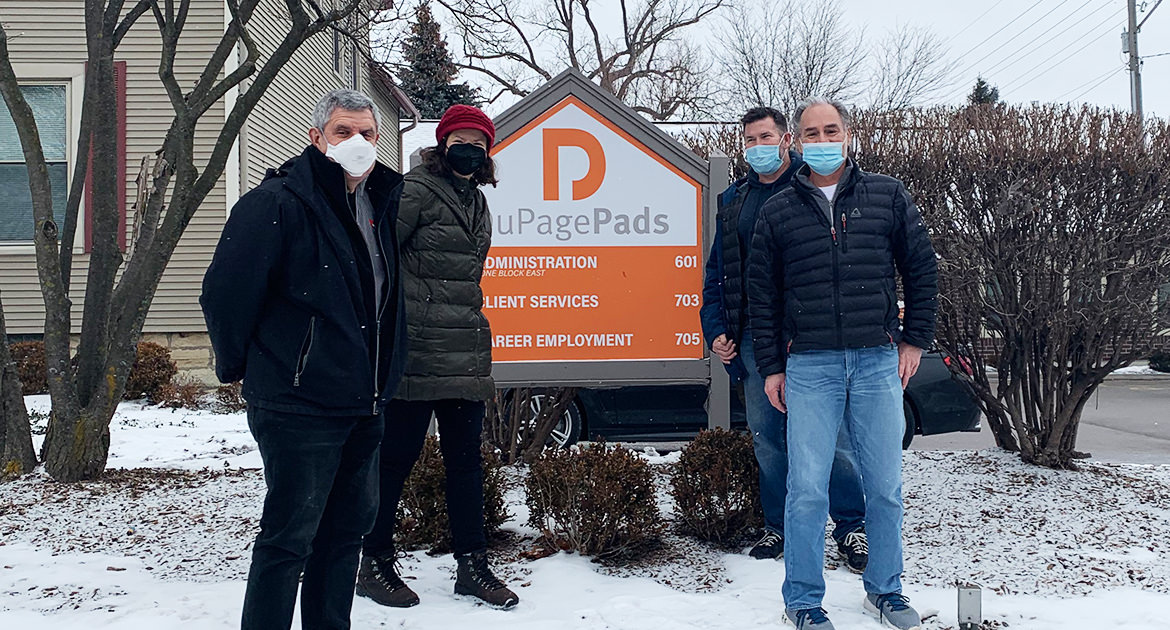 “It’s okay to lean on other people sometimes” — a motto that reminds DuPagePads of their mission to serve. Clothing and cold-weather gear were distributed at several DuPagePads hotel locations in the western suburbs where currently 180 adults and 87 children have a place to stay as they take the next step toward independent living. 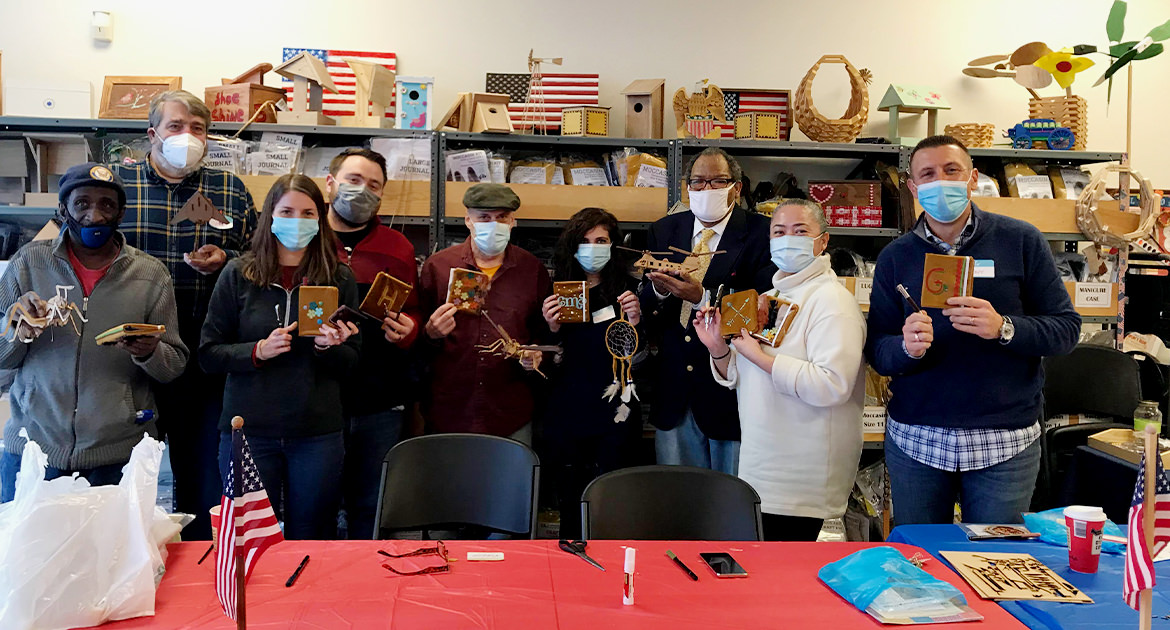 Since 1971, Help Heal Veterans has been providing therapeutic arts and crafts kits to veterans to harness the healing power of art. Our team members each worked one-on-one with a veteran while they put together art kits and spent quality time together. An activity that has been less active in the last couple years, both parties were glad for the chance to spend time getting to know one another. 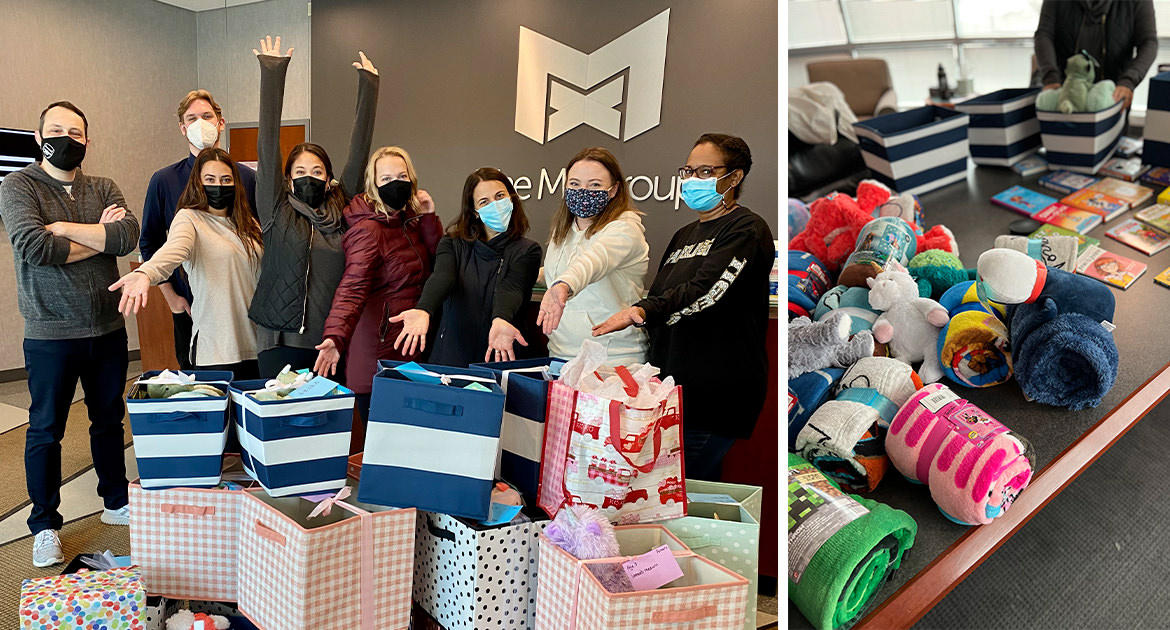 Mx’ers assembled bedtime kits for each child who lives at Hephzibah Home. The kits included pajamas, a bedtime book, a stuffed animal and a blanket. These items help to provide a little bit of comfort to these children who have survived abuse and trauma. 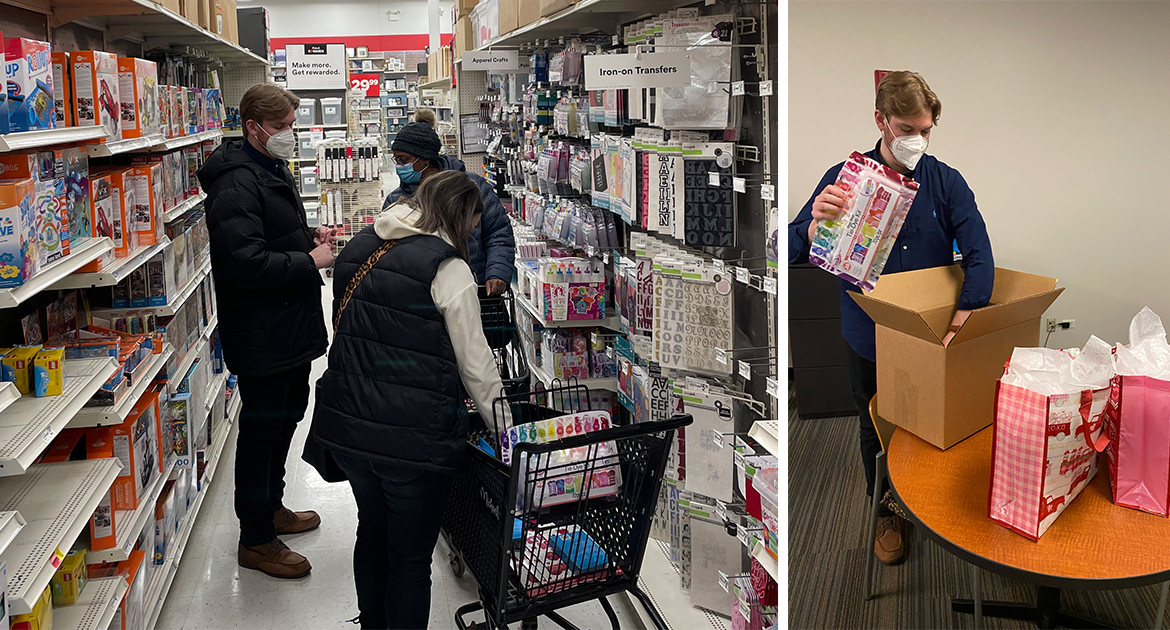 For an additional Hephzibah project, we came up with ideas for activities for groups of 20 kids to enjoy. We bought and packed the supplies for the kids living at Hephzibah Home to have a fun after-school activity with arts and crafts. 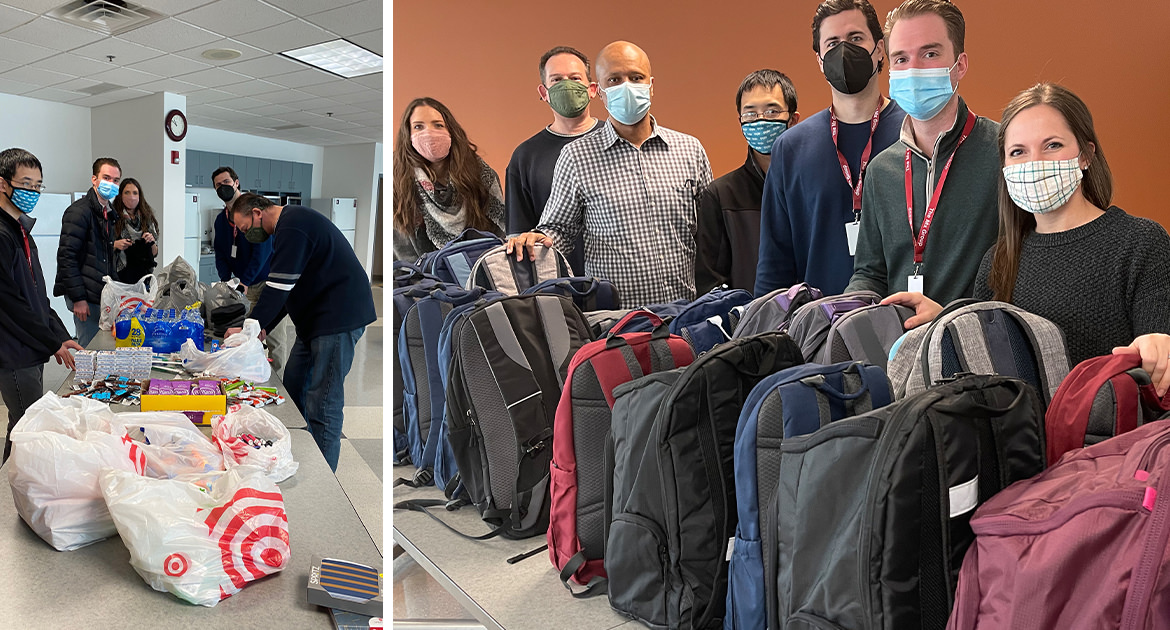 These Winter Outreach Kits will help Housing Forward provide essentials to individuals experiencing housing crises. Housing Forward’s mission to move these people into housing stability starts with simple outreach to let them know they have someone who cares and wants to help. 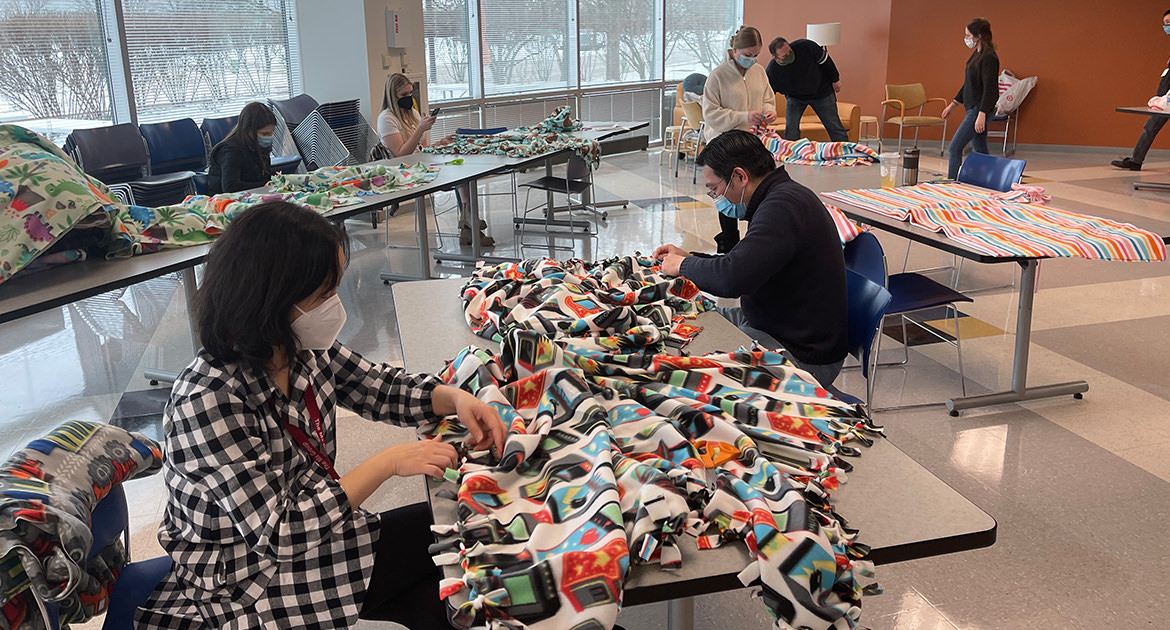 Mx’ers spent the day snipping and tying these handmade blankets (57 in total) for Project Linus, an organization that hopes to provide a sense of security, warmth and comfort to children who are ill, traumatized or otherwise in need. 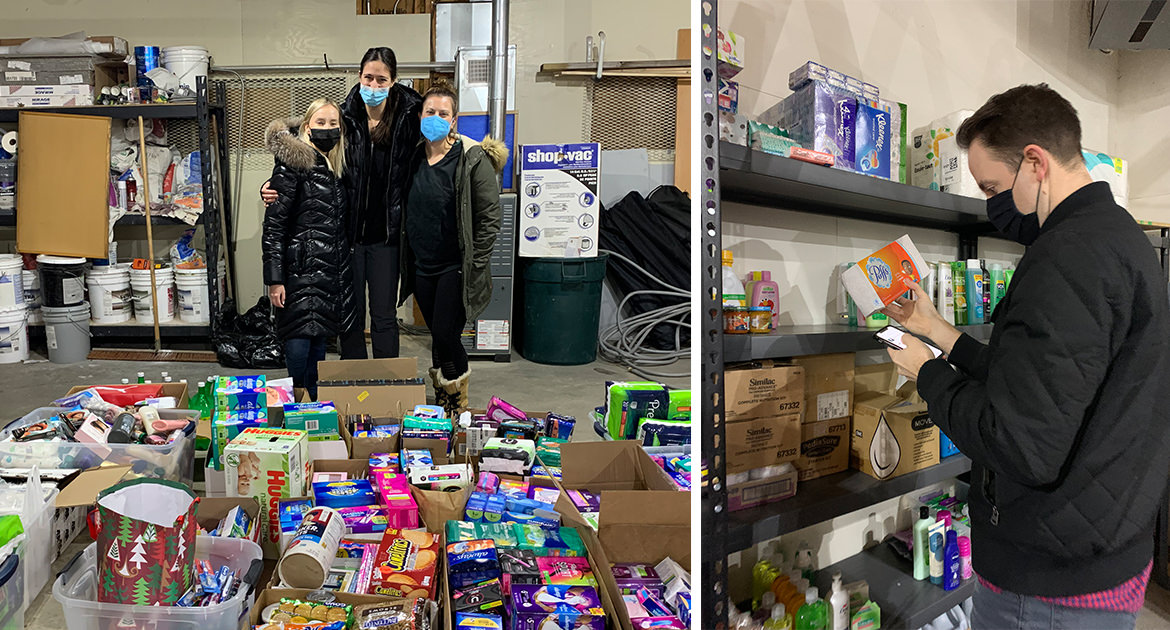 Lots of donations are a great problem to have, but organization is important! The Mx team spent the day creating an inventory, organizing the donations and ensuring all records were tracked correctly in an inventory app. The Mx Group was excited to continue partnership with Sarah’s Inn, an organization that is working to improve the lives of those affected by domestic violence. In fact, we are continuing to provide basic Google Analytics training to the Sarah’s Inn development team.

SHARING WHAT WE LEARNED

We are incredibly grateful for the time we spent with these organizations and for the impact they made on us as individuals and as a company. We are moved by each charity’s mission to make the world a better place. The Mx Group will continue to learn how we can use our resources and abilities to serve the communities around us.

“It’s going to be massive (the impact The Mx Group can make). Just being able to raise, what I’m going to call, ‘real money.’ We’ve gotten donations from individuals and they’re great. But to really move the needle, being able to sit in a boardroom and present to executives at a level they are used to seeing, is going to help us do what we need to do,” said Pete Leonard, founder and executive director of Walls to Wages.

For more content, check out our hashtag #MxImpact, where Mx’ers share highlights as they volunteer in the community.

The Mx Group is a B2B marketing agency with a 30+ year history of solving complex marketing challenges. We impact our clients’ revenue and growth by connecting the customer experience through strategy, creative, demand generation and digital development. We’re aligned around one goal: creating solutions that propel buyers and businesses forward.

View all posts by The Mx Group 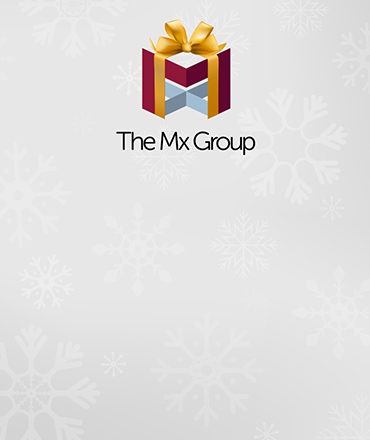 Giving Thanks and Thinking Ahead 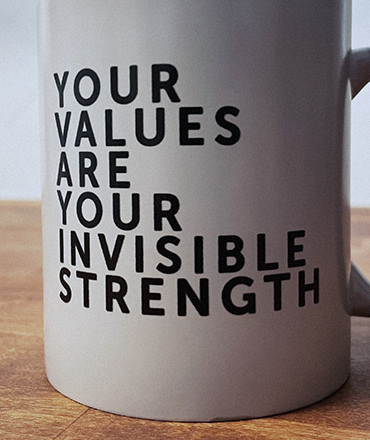 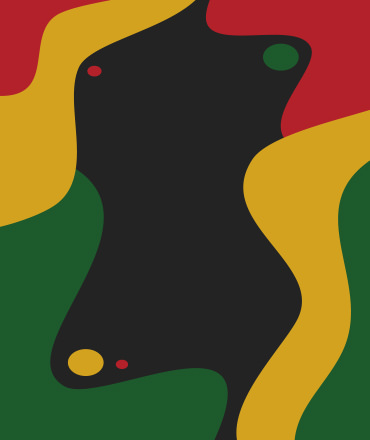 DEI and Civic Engagement in Honor of Juneteenth